Home Politics See How Much Saraki Claimed To Have In His Bank Accounts Before...
Facebook
Twitter
WhatsApp 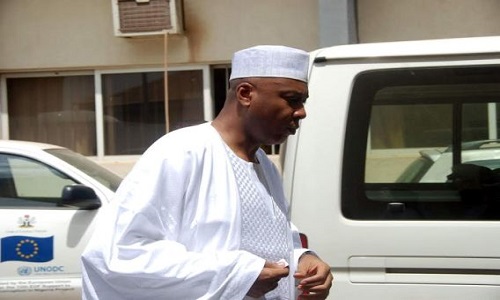 Senate President Bukola Saraki yesterday told the Code of Conduct Tribunal before which he is standing trial for corruption and false assets declaration that he was “extremely rich” before he became Kwara State governor in 2003.
He said he had $22million, about £12million, 2.6m Euro and about N4billion in cash in his various accounts.
Aside the liquid asset, the embattled Senate president said he was also proud owner of landed property with an estimated value of N2billion and 15 vehicles valued at about N263.4m.
He gave details of the vehicles he acquired as at 2003 to include: Mercedes X320, valued at N16m; Mercedes X500 worth N20m; Mercedes G500, valued at N6m; Mercedes V220 worth 2m and Ferrari456GT, valued at N25m.
Others are: Navigator, N15m, MN240 worth N8.5m; Peugeot 406, valued at N2.9m; Mercedes CLK 320 worth N9m; Mercedes E320 valued at N11m; Mercedes G500 bullet proof worth N45m; Mercedes X500 worth N300m; Lexus jeep bullet proof valued at N30m and Lincoln Navigator bullet proof worth N25m.
Saraki’s lawyer, Paul Erokoro (SAN), made these public yesterday at the resumption of the Senate president’s trial in Abuja.
Erokoro, who was cross-examining the first prosecution witness, Michael Wetkas, identified the assets as claimed by Saraki in the asset declaration form he submitted to the Code of Conduct Bureau (CCB) in 2003.
The defence counsel said he needed to point out that his client was very rich before he became Kwara State governor to erase the wrong impression created by the prosecution that he could not have acquired the property he claimed to have without obtaining loans from banks
Mr. Erokoro was, however, silent on the source of Saraki’s wealth and how he came about all the property and cash he claimed to have possessed before he became governor in 2003.
Saraki, who earned his M.B.B.S at the London Hospital Medical College of the University of London, at various times worked as a medical officer at Rush Green Hospital, Essex; director of defunct Société Générale Bank (Nig) Ltd – founded by his now late father, Dr. Olusola Saraki and Special Assistant to former President Olusegun Obasanjo, a position he held until he was elected governor of the North-Central State of Kwara.
When asked if it was possible for Saraki to have made anticipatory declaration of asset – part of the charges against the Senate president, Wetkas, who is a detective with the Economic and Financial Crimes Commission, EFCC, insisted it was not about whether or not such practice was possible, but that investigation and evidence showed that the ex-governor actually engaged in anticipatory asset declaration.
The witness pointed out that in the asset declaration form submitted to the CCB by Saraki in 2003, he claimed to have acquired houses Nos 15A and 15B Macdonald Street, Ikoyi, Lagos when, in actual fact, such property did not exist.
The witness said the only property with a similar description was No15 and Block 15 Flat 1 to 4 Mcdonald Street, Ikoyi, Lagos.
“In the course of our investigation, when we came across this No.15 A and B, Ikoyi, Lagos, we wrote to the Presidential Implementation Committee on the disposal of Federal Government Landed Property. We also wrote to the Lagos Land Registry.
“The Lagos Land Registry said they do not have records of No.15A and B, McDonald. The Presidential Committee said the record they have on their system is No.15 Mcdonald, which was sold to the company, TinyTee Ltd, and Block 15, Flat 1 to 4 Mcdonald Ikoyi, which was sold to another company, Bitti Oil Ltd.
“The evidence I gave was that No: 15 Mcdonald was sold to TinyTee Ltd, belonging to the defendant, which we did not see declared as part of his assets in all the declaration forms, about six in all.
“In my testimony on 5th April 2016, I had said the defendant declared in his asset declaration form – Exhibit 1, in appendix 3, that he bought No: 15A and B, McDonald, Ikoyi, Lagos sometime in 2000 through his company called Calile Properties Ltd, whereas our findings revealed that No.15 was actually purchased by his company, TinyTee, not Carlisle, sometime in 2006.
“We also found that the second property: Block 15 Flat 1 -4 was sold to Bitti Oil Ltd. Investigation is yet to link the defendant with that company”, Wetkas said.
All the while during the witness’ testimony, Saraki, who wore a white agbada and a cap to match, sat quietly in the “accused box”.
At a point, Erokoro attempted to discredit the form submitted by Saraki in 2003, which he signed on September 16, 2003, by claiming that it must have been tampered with by the EFCC.
The senior lawyer said since the property at No. 15A and B McDonald Road, Ikoyi Lagos that EFCC accused Saraki of anticipatorily purchasing was not purchased and paid for till 2008, five years after he included it in his 2003 asset declaration form, then “logic tells us the Exhibit 1 has been tampered with”.
But Wetkas said only Saraki, who signed the document, admitting his claims on it, could explain the reason for what Erokoro thought to be impossible.
“The Exhibit 1 (the 2003 form) was signed and dated by Saraki on September 16, 2003. As far as I am concerned, Exhibit 1 was duly signed and dated by the defendant on September 16, 2003.
“I did not insert the properties in the form. Asset declaration form is not just any document. The person declaring his assets is expected to go before a high court judge to swear an oath. They swear to affidavit, so it is believed that all he swore to, and appended his signature to is the truth. I do not need to see him in person or confront him to believe that his declaration in the form is true”, Wetkas said.
Further hearing resumes today.