Home News Feed See What Police Officers Did To Embarrass This Lady And Her Family...
Facebook
Twitter
WhatsApp 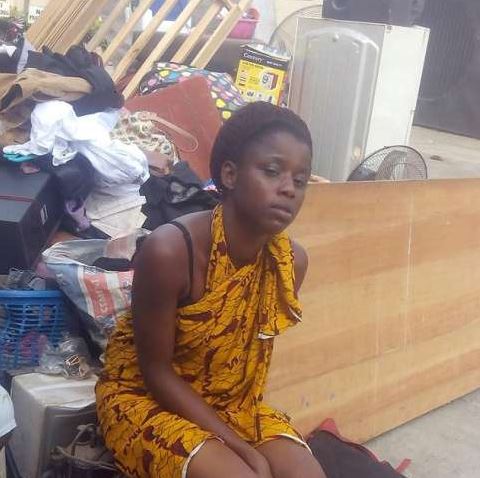 A young lady, Medina Faith Billy, is not a happy woman at the moment after men of the police force meted out what she sees as a great injustice to her and other tenants in the house they lived in.

According to Billy, the police, numbering about 30, with some thugs also known as ‘Area Boys’, stormed their house without prior notice nor orders from a court of law, to start throwing their property outside, purporting the order came from an High Court.

But the problem with the forceful eviction, according to Billy, was that the police came to the wrong house as the house they should have gone to was not their own.

After throwing them out, it was discovered that the police had gone to the wrong house but instead of apologizing and allowing them to take back their things, the police officers refused to open the gate and insisted that they must pay some certain amount of money before they are allowed to move their things back.

This is what Billy wrote on her Facebook wall where she is seeking justice:
“There is no law in this country anymore. Some men came from the Lagos High Court to our house to evacuate all our things without a day’s quit notice, not even a month’s notice.

I was telling them to call the landlord » but they insisted that the order was from the High Court of Lagos. The policemen that came were up to 30 and the agbero that came with them were up to 40.

I was explaining to them they came to the wrong house because we have two 21s in our street but they didn’t listen. They were throwing all my property like ball, damaging my AC and other things.

I said to myself where is the law in this country because police that were meant to support and protect the citizens of this country, were the same police pointing guns at their citizens just because they have guns.

After throwing all our property outside, they locked gate. They later realised that they had come to the wrong house. They locked the gate and asked us to pay them money to take the property back to our apartment.”