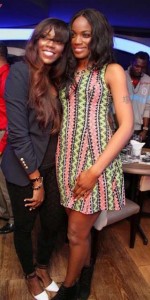 Female Nigerian singer, Seyi Shay was faced with the question following an Instagram post of hers which further raised suspicion that there is an ongoing cold war between her and Tiwa Savage.

In the interview granted to Saturday Punch, the singer explained her Instagram post which she captioned, “I compete with NO ONE. You heard me girl, YES YOU. Good evening. #carryon,”saying it was not meant for anyone in particular.

Asked if she had a beef with Tiwa Savage, or if the post was intended for her, Seyi Shay said: “Please I would love it if you call her now and ask her this same question if there is any beef between Tiwa Savage and Seyi Shay.”

“There is a quote that says that a competitive mind is not a creative mind and it is something I believe in. Girls compete against one another a lot and it is too much. Everybody competes but I think females do it a lot for no reason at all. If you are too busy competing, you will not have time to be creative. The post on Instagram was not directed to anybody, I was just minding my business but people took it the wrong way. I am aware that some people thought I was directing it at Tiwa Savage but I was not. After I had posted it, I told myself that I hope people would not think it was directed at anybody but I didn’t care that much; so I just left it.

“I read what she said about me but to be honest, when I post comments online, I am very sarcastic. People should be very careful when they listen to me speak and give answers because you will never know if I am serious or not. I play with Nigerians so much and that is because I think they are so gullible and I think it is funny. I did not feel any way about the comment she made about me. They ignore me, I ignore them,” she said.

Prior to the Instagram post above, Seyi Shay had once said, during an interview aired on Channels TV, that she does not know Tiwa personally.

A statement which Tiwa Savage apparently reciprocated when she granted a radio interview recently, and was asked what she thought about Seyi Shay being a Pepsi brand ambassador.

She said during the interview; “See I knew you were going to drop this in anyway, everybody has heard! What? Am I happy for Davido? Of course. I love him. He’s absolutely fantastic,”a response which has been widely interpreted as Tiwa’s implied indifference to Seyi Shay’s presence in the industry as a competitor.

On a positive note, however, Seyi Shay further revealed during the interview that she just recorded a song with Niniola and she was feeling very optimistic about the song’s chances of being a super hit.

“I am very excited at the moment because I just recorded a very amazing song. I am happy because I have made a new song and I have a very good feeling about it. The song is with me and Niniola, I love working with women because I believe in girl-power. I just released an album called Seyi or Shay and I am going around Africa to promote the album. While I am promoting my album, I am also recording new songs especially when I meet amazing artistes from other African countries,” She said.