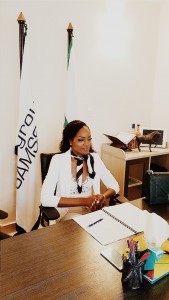 She might not know how to pronounce T.W.O, but she’s making money.

Singer Seyi Shay has sealed yet another major deal! The singer was announced as the official brand ambassador to Samsson, a telecommunication company that operates largely in the middle east.

The company also operates in Lebanon, Dubai and Iran.

Announcing the deal her management company Bobby Taylor via Instagram:

“Top female superstar Seyi Shay has done it again! The pack and go crooner yesterday sealed a deal with middle eastern telecoms company Samsson to become the ambassador for the brand. Samsson who are service providers for Etisalat & Cloud 9, hosted Seyi Shay at their headquarters in Lagos where the contract was signed and celebrations followed.
I say- Praise God!!!! and thanks to #Thesamssongroup”