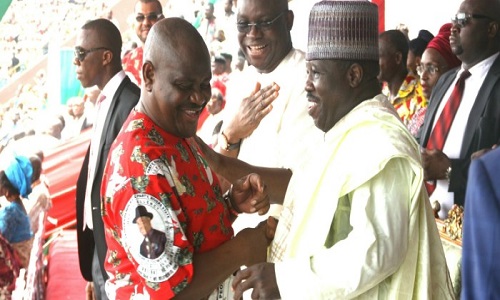 Governor Nyesom Wike of Rivers State has asked sacked national chairman of the Peoples Democratic Party, PDP, Senator Ali Modu Sheriff, to apologize to the party for his conduct during and after last weekend’s national convention of the PDP, which held in Port Harcourt.
Mr. Sheriff, who was propped up to contest and win election as national chairman during the national convention, reportedly staged a walk out in anger after it emerged that stakeholders instead opted for a caretaker committee headed by former Governor of Kaduna State, Senator Ahmed Makarfi.
The erstwhile chairman later addressed a separate press conference where he purportedly canceled the national convention, citing various court injunctions.
In a bid to retain his seat, Sheriff approached the federal high court sitting in Lagos on Tuesday, which reportedly barred the Independent National Electoral Commission, INEC, from recognizing the Makarfi-led caretaker committee.
However, another court order was secured same day recognizing the caretaker committee and upholding the dissolution of the Sheriff-led National Working Committee.
Reacting to the actions of the erstwhile national chairman during and after the national convention, Wike, who was one of the PDP governors that supported Sheriff and defended his imposition on the party, accused the former Borno Governor of acting a written script aimed at destroying the party.
The governor’s position was contained in a statement by his media aide, Simeon Nwakaudu on Thursday.
The statement said: “We have seen that there is a hidden agenda. But nobody can destroy the PDP. PDP will wax stronger. Those around the former acting National Chairman have questionable character. They are people who think that they can use the judiciary to cause crisis. In my entire political career, I have never seen a man with many opponents as Senator Sheriff. Modu Sheriff should apologize to the party”, he said