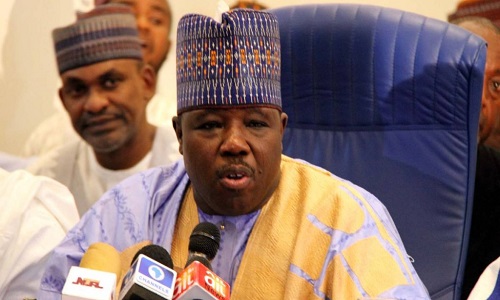 The forum of ex-Peoples Democratic Party Ministers have said that the May 21 national convention of the party may turn out to be the final funeral rites for the former ruling party.
The ex-ministers warned that unless the national chairman of the party, Ali Modu Sheriff, rescinds his decision to contest for the seat, the coffin of the party would be nailed at the event.
The National Executive Committee of the PDP confirmed fears it was working to keep Sheriff in office beyond May 21 when new national officers of the party would emerge at the national convention in Port Harcourt, Rivers State when the national chairmanship position was zoned to the Northeast, where the incumbent hails from.
While the South-west clamored for the position, arguing that it was its turn to produce the next national chairman of the party after all the other geo-political zones had at one time or the other occupied the position, the PDP NEC went ahead to zone the position to the Northeast.
Sheriff, a former senator and two-term governor of Borno State, is the most formidable candidate for the position from the Northeast.
Aside the fact that the Northeast has been given the go-ahead to retain the seat of PDP national chairman, the North has also been handed the presidential ticket for the 2019 general elections.
The argument by opponents of the recent zoning formula adopted by the party is that the presidential candidate and national chairman should not emerge from the same region in the spirit of equity and fair play.
Restating their opposition to the emergence of Sheriff, the ex-ministers insisted that the former Borno governor must drop his ambition or risk being the last national chairman of a united PDP.
Spokesperson for the forum and immediate past Minister of National Planning, Dr. Abubakar Sulaiman, said these while speaking with reporters in Abuja on Saturday.
Mr. Sulaiman argued that any attempt by Sheriff to consolidate his position at the convention would spell doom for the party, adding that most stakeholders would dump the PDP and “allow it to continue to swim in impunity”.
The ex-minister said concerned PDP members and stakeholders would not look the other way while Sheriff hijacks the party because of his ambition, stressing that the right thing needed to be done for the party to regain control of power at the center in 2019.
“Ali Modu Sheriff is there to perform the final funeral rites of the PDP. The May 21 national convention will mark the lying in state of the PDP, which will be forever. We will not stop talking until the right thing is done”, he said.
Sulaiman pointed out that “with what he (Sheriff) is doing now, I think he is on a mission. The national convention must not hold on May 21. If it must hold, it will be the day of celebration of funeral rites of the PDP”.
The ex-minister recalled that it was “the impunity” in the party that led to its defeat in the last general elections and urged party members and leaders at all levels to end impunity and reposition the party for future victory at the polls.
Sulaiman described as political fault, the zoning of both the chairmanship and 2019 presidential ticket of the PDP to the North, attributing the development to the handiwork of “Ali Modu Sheriff and his cohorts”.