Home Politics Sheriff’s Ambition Was A Threat To PDP, We Had To Remove Him...
Facebook
Twitter
WhatsApp 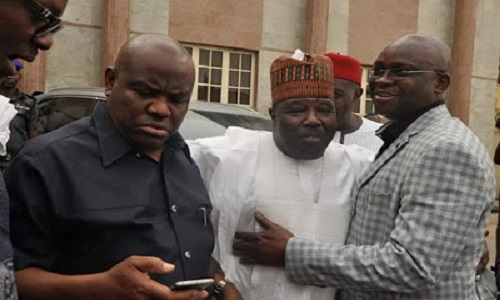 Governor of Ekiti State, Mr. Ayodele Fayose, has justified the dissolution of the Senator Ali Modu Sheriff-led National Working Committee of the Peoples Democratic Party, PDP, saying it was done to save the party.
Recall that the national convention of the PDP, which held in Port Harcourt, the Rivers State capital at the weekend, sacked Sherriff and other members of his NWC from office while a caretaker committee headed by Senator Ahmed Makarfi, a former governor of Kaduna State, was appointed to oversee the affairs of the opposition party for three months.
Justifying the decision of the national convention, Mr. Fayose explained that although he was one of those who supported the emergence of Sheriff as national chairman in February, he had no option that to support his removal so as to forestall what he termed the disintegration of the party.
“We cannot sacrifice the party for any individual”, the governor was quoted as saying in a statement issued Monday in Ado-Ekiti by his Special Assistant on Public Communications and New Media, Lere Olayinka.
Mr. Fayose, therefore, urged the ousted PDP national chairman to accept his removal in good faith and join other members to rebuild the party ahead of the 2019 polls.

He said: “I supported Senator Ali Modu Sheriff in good conscience. But when it became obvious that his continuous stay in office as the National Chairman will jeopardise the collective interest of the party, I had no option than to support his removal.
“To me, the general interest of the party overrides that of any individual and there is no how I can stand in support of any plan to sacrifice the party for any individual.

“Anyone whose ambition threatens the collective interest of the party should be removed to save the party and that’s exactly what we have done.
“I therefore urge Senator Ali Modu Sheriff to accept the dissolution of the NWC and appointment of the Senator Ahmed Makarfi-led Caretaker Committee in good faith and cooperate with other well-meaning members of the party to reposition it so as to achieve the much needed electoral victory in 2019.

“To Sheriff and other well-meaning members of the party, what should be important is the party and not the individual and no sacrifice should be too much for anyone to make for the party at this time”.