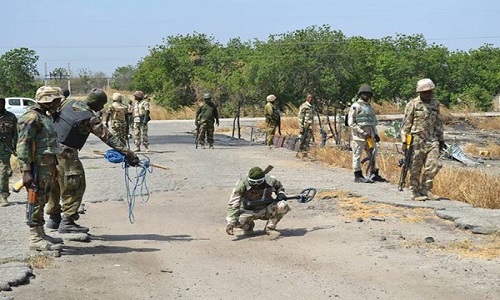 The Nigerian Army has announced the death on Sunday of a soldier and four civilians in Borno State.
They were killed when an Improvised Explosive Device (IED) buried close to a military checkpoint exploded along Bui-Damboa road in Borno, a statement by the Army spokesman, Sani Usman, said.
Mr. Usman, a Colonel, said at about 8:15a.m today (Sunday), a tricycle (Keke NAPEP) accidentally stepped on the IED planted close to a military check point on the outskirts of Bui town and immediately exploded.
He said four persons comprising a woman and her baby, as well as two male adults, were killed in the ensuing explosion.
The Army spokesman said the three other persons injured including a soldier, were immediately taken to Biu General Hospital.
He, however, regretted to announce that the injured soldier died at the hospital.
Col. Usman said the general area has been cordoned off and Explosive Ordinance Device (EOD) team from Forward Operation Base (FOB) in Buratai, has been mobilized to carry out further search of the area.
The statement noted that preliminary investigation shows that the IED was buried a long time ago undetected, only to explode when the tricycle unknowingly stepped on it.
Mr. Usman pointed out that this development has brought to the fore, the need for more security consciousness and vigilance among all.