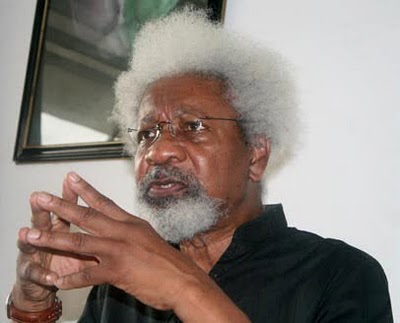 Professor Wole Soyinka has denied comments attributed to him in an interview assessing President Muhammadu Buhari’s first year in office.
The Nobel laureate, in a statement on Tuesday, described a report quoting him as declaring his support to Mr. Buhari as a “disgusting forgery”.
“Once again, I notify the security arms of Nigeria about this increasingly obsessed exercise in identity forgery”, the renowned playwright said in a terse statement.
According to the reports, Mr. Soyinka said he had faith in the president “to stop the unprecedented bleeding of the country from never-seen looting in history”.
It further quoted him as saying a situation where criminals were rewarded under the past administration openly and obscenely, could not be allowed to continue.
“We needed a Buhari to put his legendary stamp of integrity to drive governance and in one year there is a new lease of life in the way government business is now conducted.
“On economy we have believed lies of GDP and statistics built on falsehood for too long. Corruption was driving the economy as the working capital while petrol-dollars gave us a false sense of insularity”, the report continued.
The report said the Nobel Laureate lamented that everything “crashed on us” without the money from oil like it used to be, blaming years of mismanagement for the current economic crisis in the country.
“With Buhari having used the last 12 months for housekeeping, the trajectory of the economy will continue to go north with more hard work and faithful implementation of government programmes”, Mr. Soyinka concluded in the report.
In the statement issued on Tuesday, Soyinka denied making such remarks in any interview.
“I alert the public to beware of the danger this portends in the murky atmosphere of Nigeria’s ongoing politics”, he said.
“The sycophants of power and influence will clearly do anything to gain attention and preferment, but they only earn the contempt of decent citizens, including those on whom they foist their unsolicited services”.