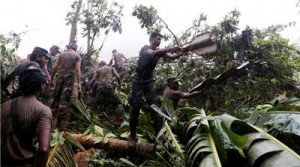 Sri Lankan authorities have disclosed that rescue efforts in villages affected by deadly landslides are being delayed by heavy downpour.

As many as 200,000 people have been displaced in three villages in Central Sri Lanka after mud slides which were triggered by torrential rain pour left many villagers trapped beneath mud.

Military representative Brigadier Jayanath Jayaweera told journalists in the capital, Colombo, on Thursday, that the armed force was observing the circumstance and would send more troops to the most exceedingly awful hit Kegalle region if necessary.

Sri Lanka’s Disaster Management Center reported more than 350,000 individuals were affected by the avalanches and around 220 families are still unaccounted for.

Mudslides are fairly common in Sri Lanka and authorities have warned of more landslides as heavy downpours continue.