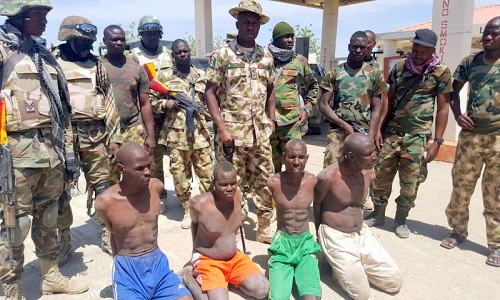 Sixteen suspected Boko Haram insurgents in Balazala and Ahamdaga Makaranta villages in Dure district of Borno State, have surrendered to troops of the Nigerian Army.
They include three ameers (leaders) in the sect hierarchy: Hamidu Buba (ameer of tailors), Musa Buba (ameer of mechanics), and Ali Idrissa (ameer of carpenters), according to the Acting Director of Army Public Relations, Colonel Sani Usman.
The rest, the army claimed, confessed to be “Rijan” (fighters), who have participated in various Boko Haram attacks on villages and towns.
The repentant terrorists said they surrendered due to the ongoing crackdown operation on insurgency by the military, which they confessed was taking its toll on them.
They also stated that the sect had run out of food and members now survive on roots and unripe mangoes.
They also said two of their colleagues who went in search of food, were killed at the Frigi crossing point some days earlier by troops.
Usman said: “the troops of 122 Task Force Battalion injunction with some elements of 26 Task Force Brigade on receipt of information from some escapees, embarked on a clearance patrol to Fadagwe Muni, along Yamtake-Gwoza road.
“On sighting the troops, the suspected Boko Haram terrorists fled and left behind an abducted 16 year old female cripple. The terrorists also abandoned a large stock of grains stored in underground pit.
“Other items recovered include a grinding machine, two tricycles and one photo printer. The troops nevertheless pursued the fleeing insurgents and killed some of them.
“Similarly, troops of 121 Task Force Battalion also conducted clearance operation at Kadera Dam and Anguwar Fulani, while troops of 192 Battalion that conducted similar operation to Guduf, Nagadio, Duma and Kusarha. The Boko Haram terrorists ran to the top of the mountains and they were engaged with heavy mortar fire”.
The army also announced yesterday that troops of 28 Task Force Brigade successfully cleared enclaves of Boko Haram terrorists along Galtha Baba, Galtha Musa, Bulakurma, Shatimari, Chukruk, Bulangaje, and Disa villages.
During the operation, a suspected Boko Haram terrorist was captured alive and three motorcycles, bags of grains, their flags and uniforms were recovered.
The troops also rescued 15 persons that were held hostage by the Boko Haram terrorists in the area.