A suspected robber, Dare Amos, on Sunday sneaked into the Foursquare Gospel Church, Magboro, Ogun State and allegedly stole a motorcycle belonging to one of the worshippers.
Amos, who was at the verge of escaping with the motorcycle, was chased by security guards in the church premises who raised the alarm and mobilised some other motorcycle riders in the church. 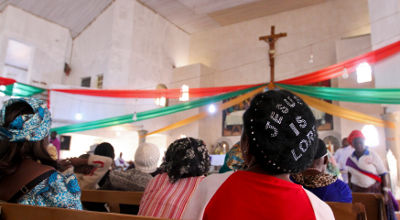 They chased the suspect and arrested him as he was about riding onto the Lagos-Ibadan Expressway.
The Ogun State Police Public Relations Officer, Muyiwa Adejobi, who confirmed the incident to newsmen, said “Policemen from the Ibafo division were invited to take him away.

“The suspect gave his name as Dare Amos, 24 years, from Ijebu Ode, Ogun State. He said he resides in Mushin, Lagos State.

“He went to the church to steal a motorcycle around 12.10pm. We have recovered the motorcycle from him and the case is under investigation,” Adejobi added.

Meanwhile, upon his arrest, the suspect said he took to robbery because he was hungry.
The suspect, who reportedly gave conflicting information about himself, allegedly claimed to be from the Mowe/Ibafo area of Ogun State.

He said he was a barber and it was his first time of committing a crime.

Asked why he decided to go to the house of God to steal a motorcycle, he said, “It is because I am hungry. My job is not bringing in enough money to cater to my family members.”

A member of the church, Ogungbola Adenekan, said the incident happened around 1 pm while the men’s fellowship was on.

Adenekan said, “The service was about rounding off when some ushers who knew the owner of the motorcycle came into the church. They asked the man if he gave anybody permission to take his motorcycle away and he said no.

“We immediately asked some of our brethren with motorcycles to chase the suspect. Some commercial motorcyclists also joined them. He was about to ride the motorcycle onto the expressway when he was caught by the members who went after him. They brought him back to the church.

“He had disconnected some of the wires in the motorcycle. He found a way to start it without any noise. He had sneaked into the church and acted as if he was a member.”