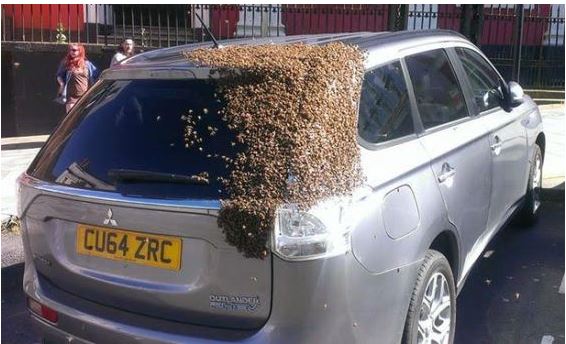 A bizarre and extremely dangerous situation occurred in South Wales this week as a swarm of bees, about 20,000 followed an oblivious driver home for two miles after a queen bee got trapped in the boot of the car. National Park ranger, Tom, noticed the bees swarm and called on Bee collectors to come handle the situation before someone got hurt… 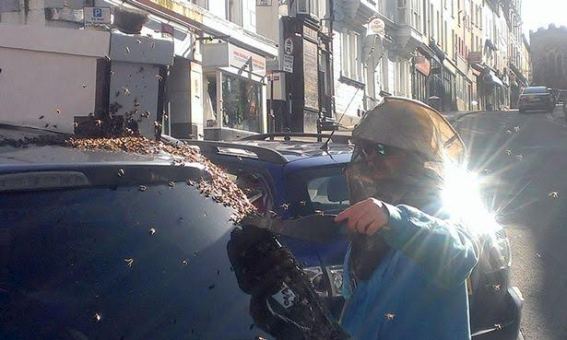 Tom, 41, told Wales Online: “It was spectacular. I was driving through when I spotted the big brown splodge. A lot of people were really amazed by it, cars were slowing down and people were taking pictures of it. 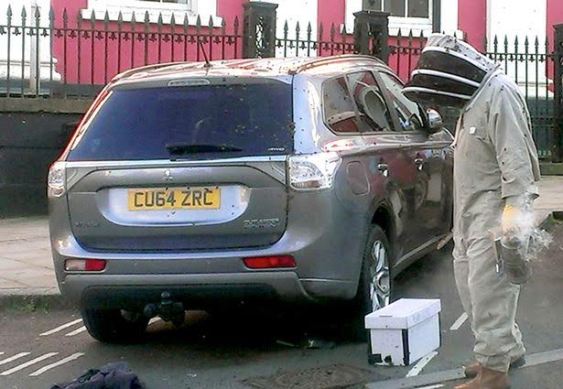 The woman who had the car the bees followed, Carol said: “It was incredible really. I’ve never seen anything like it – it just goes to show the power of nature. One theory was that the queen was trapped in my car and the swarm were following her.
“But they couldn’t find the queen anywhere so I’ve no idea if that was right.”
Apparently bees can swarm at this time of the year and it is a very strong instinct for them to follow the queen.
Roger Burns, of Pembrokeshire Beekeepers, said: “It is possible the queen had been attracted to something in the car – perhaps a sweet or food in the car.
“The swarm of around 20,000 had followed her and were sat around on the boot of the car.
“I brought over a cardboard box and carefully brushed them into there as quickly as possible as I was aware it was a big swarm in the middle of the high street.
“I got about 15 or 20 stings for my trouble.
“I then left the cardboard box on the roof while we waited for the last few hundred bees to leave the boot but then a gust of wind blew it off and the queen may have fled back to the boot again.”
Source: Mirror UK
Share
Facebook
Twitter
WhatsApp
Previous articleIs Toyin Aimahku’s Ex-Huasband, Niyi Johnson Hooking Up With Seyi Edun
Next articleThe dangerous path Children from a remote Chinese village have to pass through to get to school
- Advertisement -