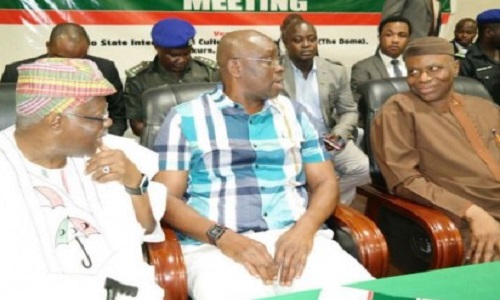 Leaders of the Peoples Democratic Party, PDP, in the Southwest on Wednesday raised a committee to ensure “equitable” distribution of the positions allotted to the zone among the six member states of the region.
The positions are national secretary, national publicity secretary, national auditor and zonal executive committee.
In a communique issued at the end of the region’s leaders meeting at the International Culture and Events Centre (The Dome) Akure, the Ondo State capital yesterday, the PDP leaders also resolved to set aside their differences and forge a common front to enable the party regain its lost glory.
The meeting was put together by the Ondo State governor, Olusegun Mimiko and his Ekiti State counterpart, Ayo Fayose.
The communique, which was read by former Minister of Youths and Sports, Professor Taoheed Adedoja, said the leaders unanimously resolved “that the time is ripe for all members of the PDP in the South-West to forge a common front and pursue a common agenda towards occupying their destined leadership position in Nigeria.
“That despite the challenges confronting the PDP, the South-West caucus has agreed to unite and confront the challenges that is facing the Yoruba race in Nigeria.
“That members of the PDP have agreed to rise up beyond personal interests to confront crucial national issues that affect us as a race, especially the thriving menace of the Fulani herdsmen.
“That the meeting notes with dismay, the poor state of the national economy and feel terribly sad that the current ruling party has not demonstrated the capacity to contain the economic challenges with attendant dwindling fortunes that has reversed almost all the economic gains recorded under the PDP.
“That developments in the sphere of elections, is becoming disturbing and from all indications, the accomplishments recorded by the last PDP Government as regards the conduct of credible elections, are beginning to wane.
“The Southwest PDP wish to put on record our dissatisfaction with the performance of the electoral body under the ruling party as all the elections the APC has so far superintended have ended as inconclusive”.
The Southwest PDP also expressed its readiness to effectively play the role of an opposition, noting that the role was crucial to democratic survival.
The caucus also welcomed former Oyo State Governor, Senator Rashidi Ladoja, back to the party, having sent representatives to the meeting.
PDP leaders at the Akure meeting included Chief Ebenezer Babatope, Senator Iyiola Omisore, Jimi Agbaje, former leader of the House of Representatives, Mulikat Adeola-Akande; Chief Saka Balogun, Debo Anisulowo and Chief Jumoke Akinjide.
Others were Adeseye Ogunlewe, Adesiyan Jelili, Doyin Okupe, Senator Remi Okunrinboye, Professor Tahoeed Adedoja, Eddy Adefeso. Jide Adeniji, Tajudeen Oladipo, Bisi Jinadu and Bashir Awotorebo.