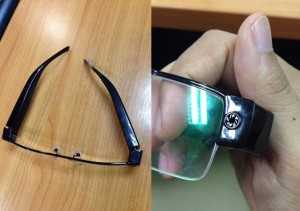 Three Thai students caught cheating during a medical college entrance exams made headlines this week for their elaborate high-tech cheating equipment. Supervisors discovered wireless cameras embedded in the frames of the students’ glasses which were connected to smartwatches on their wrists. They used the cameras to send images of questions to an external group, who then replied with the answers via the smartwatches.

That’s quite a clever setup, but sadly, the students were caught when instructors noticed that their glasses had unusually thick frames and decided to have a closer look, which led to the discovery of the hidden cameras. The story went viral on social media after Rangsit University director Arthit Ourairat posted pictures of the cheating equipment on his Facebook page.

“They did it in real-time,” Arthit wrote, adding that the students had spent a whopping 800,000 baht ($22,700) on the setup. “This was the most high-tech exam cheating system I’ve ever seen. We want this to be known in public to make people aware that we must be careful, particularly for medical exams where there is high demand among students but not many vacancies.”

Most social media users condemned the students for their actions and accused them of putting people’s lives at risk. “If they had passed and graduated, we might have had illegal doctors working for us,” a Facebook user wrote. But a few actually praised the students for their ingenuity, with comments like “Cool,” and “Like Hollywood or Mission Impossible.” There’s no denying that the students’ plan was clever, but their intelligence actually backfired on them – they were blacklisted by the examination board and disqualified from gaining admission at the university. Their identities have been withheld, but the scandal is likely to have a negative effect on their future careers.