One of the lead characters of The Fast and Furious franchise, Dwayne “The Rock” Johnson has uploaded this first-look photo of his character Hobbs. 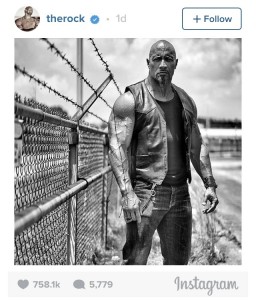 The Rock also teased a potential spin-off series for Hobbs, and talked about how his character is going to “disrupt the franchise” in the latest installment:

When you strip a man of all he has. All that’s important to him. You force him to return to his roots… and sometimes that’s a very dangerous and twisted place.
If I was going to return for another Fast & Furious I wanted to come in and disrupt the franchise in a cool way that got fans fired up and their blood pumping to see a new version of Hobbs and his ‘Daddy’s gotta go to work’ mentality and set the table in a cool way for where the character goes in the future.
Maybe it’s a spinoff movie. Maybe it’s more ‪#‎FF‬ movies. Or hell maybe Hobbs just gets on his motorcycle and rides off into the sunset never to be seen again.