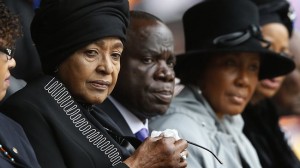 On this day in 1991; Winnie Madikizela-Mandela, former African National Congress Women League president and Deputy Minister of Arts and Culture, was found guilty on four charges of kidnapping and four of being an accessory after the fact to assault. Co-accused John Morgan was found guilty of kidnapping and Xoliswa Falati guilty of kidnapping and of assault with intent to do grievous bodily harm. The case arose from the fact that one of the kidnapped youths, 14-year-old Stompie Sepei, had been found dead from his injuries near the crime scene. The sentencing was scheduled for 14 May 1991.The actual crime had allegedly been committed by her thuggish’ bodyguards dubbed the Mandela United Football Club’ (MUFC) . In 1997 the Truth and Reconciliation Commission (TRC) reached a verdict that Madikizela-Mandela was guilty and had played a role in the killing of Stompie Sepei.
Also on this day in 1857; Sir Ronald Ross the discoverer of the malaria mosquito was born in Almora, India in 1857.
After graduating in medicine, he entered St Bartholomew’s Hospital Medical College. In 1881 he joined the Indian medical service and visited Madras, Burma and Andaman Islands developing his interest in poetry, literature and mathematics.

Sir Ross began his study of malaria in 1892. He discovered the transmission of malaria in humans through the Anopheles mosquito in 1897. Sir Ross continued his research and visited various countries including West Africa, Panama and other countries advising and aiding in the extermination of malaria. In 1902 he received the Nobel Prize in medicine for his discovery. Sir Ross authored a book, The prevention of Malaria, in 1910.

While Sir Ross is known for his work on malaria, he is also remembered as a mathematician, editor and novelist. He was the Director-in Chief of the Ross Institute until his death in 16 September 1932.

Equally on this day in 1969; Pan-Africanist Congress leader, Robert Sobukwe, was arrested after the Sharpeville anti-pass campaign of 1960 and harshly sentenced to three years in prison.

At the end of his sentence, Parliament enacted a General Law Amendment Act, which empowered the Minister of Justice to prolong the detention of any political prisoner indefinitely. Subsequently, Sobukwe was moved to Robben Island, where he remained for an additional six years.

The Minister of Justice, Jimmy Kruger, announced that Sobukwe was being released from detention on 13 May 1969. On his release, Sobukwe was allowed to join his family in Galeshewe, Kimberley. However, he still remained under twelve-hour house arrest under the Suppression of Communism Act of 1950.

Sobukwe was therefore prohibited from taking part in political activities as result of the banning order, and as such could not be quoted by any person or by the press. During his incarceration Sobukwe obtained an Honours Degree in Economics from the University of London, and also began studying for a Law Degree.