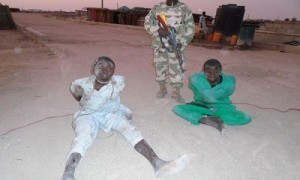 On this day in 2014;Boko Haram Boy confessed to razing houses in Borno village for N2,000

A young man, named, Ibrahim Tilitili was said to have been paid the sum of two thousand Naira (N2,000), to burn down few houses at Mandara Girau village in Biu local government area of Borno state. Ibrahim, Chibok by tribe and resident of Mandara Girau village confessed that one Mallam Sani also a resident of the Village gave him the amount and instructed him to set some of the houses in the village on fire.

Also on this day in 2014;The United States said that it does not have information to support the claim by the Nigerian military that it knows the whereabouts of the more than 200 kidnapped schoolgirls.

The former Chief of Defence Staff, Air Marshall Alex Badeh had said that the military knew the location of the schoolgirls, abducted by the Boko Haram Islamic sect on April 14.

Equally on this day in 2014;Over 200 officials of the Sure-P Federal Task Force were arrested by the Lagos State Task Force on Environmental Sanitation and Special Offences in their training ground at the old Lagos toll gate and taken to the headquarters of the Lagos State Police Command in Ikeja.