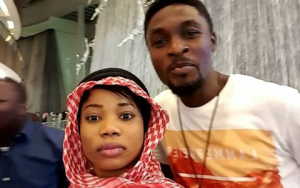 Read the report from another online blog: –

They learnt that the duo have been dating for a while now but wanted the affair to be kept a secret. The lovers, we are told, are very fond of themselves at the moment.

A trusted source told our correspondent that he has spotted them together in a suggestive manner at different movie locations.

‘They are always together. People in our industry know that they are now an item. There’s nowhere you will see Seyi that you won’t find Niyi,‘ the source said.

Another dependable source said that they are currently in Dubai together.

‘As we speak, they are in Dubai together. They left Nigeria over a week with Seyi’s closest friend in the movie industry, Bidemi Kosoko and one other actress Tawa Ajisefini,’ the source revealed.

‘They have been dating for a while now. They look good together but have been keeping it on the low,’ our source added.

Niyi Johnson, who parted company with his wife of two years, Toyin Aimakhu after the latter accused him of infidelity, was recently romantically linked with fast-rising Nollywood actress Nkechi Sunday, but the duo denied the rumour.

An insider, however told us that Niyi never dated Nkechi Sunday as it has been widely reported.

‘It’s absolutely not true. No romantic relationship exists between him and Nkechi. They are friends. It’s Seyi that he’s dating and I think they are happy together,’ the insider revealed.

Seyi Edun is one of the upcoming young Yoruba actresses at the moment. The petite lady came into limelight through her self-produced movie, Eja Nla.