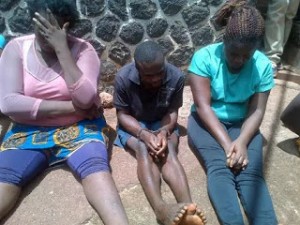 Two women have been nabbed after they staged the kidnap of their own mother and then gave a rather weird and funny excuse for the act. Emmanuel Ojukwu, the Enugu State Commissioner of Police, on Thursday, paraded two women, who allegedly stage-managed their mother’s kidnap. Daily Post reports that they were arrested alongside the boyfriend to one of them.
According to Ojukwu “the suspects were arrested on a different date in connection with the purported kidnapping of one Mrs. Hannah Achime.  “One Monday Egbe, aged 30 years, was arrested and he confessed how the two of the victim’s daughters, Onyinyechi Achime and Akunna Achime invited him to the business to enable them collect money from their elder brother, one Mr. Eric Achime based in Lagos.
“Ransom of N2.5 million naira was demanded, while N500,000.00 was agreed to be paid, though nothing was paid. Suspects all confessed to the crime.”  While being interviewed by journalists, the two ladies claimed to have executed the crime as a last measure towards raising money for their mother’s medical treatment.  One of the suspects, a graduate of the Enugu State University of Science and Technology, who was to go for the National Youths Service Corps, by end of this month said “we have been begging our brother to bring money for our mother’s eye treatment but he refused.
“The eye problem became so much and we had no option; we decided to do that in order to raise money. We took her to a hotel at the Camp and paid for a room there.  “I brought my friend and he helped us in arranging the kidnap. He was the one calling our brother, but he refused to bring money; he said the kidnappers can eat her if they liked. We didn’t hurt her at all; it was all for our mum’s good, though we didn’t tell her.  “She got to know later, and she has been begging the police to drop the case. As we speak her medical condition is even getting worse.”