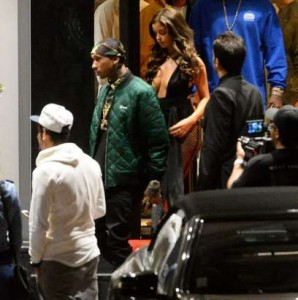 It has been what, 2 hours since they broke up? 26-year-old rapper. Tyga was seen on May 19, 2016, exiting his hotel in Cannes with his new alleged girlfriend – model Demi Rose.

What’s funny is that the British underwear model looks exactly like Kylie.

The pair were pictured leaving their hotel together as they headed for the Gotha Nightclub, where Tyga was slated to perform with Chris Brown.

Barely three days after their split, Tyga had shown up at the MET Gala with two different models, as Kylie had found comfort in the arms of Scott Disick.

Although Tyga claims he is still very much in love with Kylie, he might just be on a revenge stint as reports reveals that his and Kylie’s sex tape had been released on his website, Tygasworld.com, for about 30 minutes before it had been pulled down.