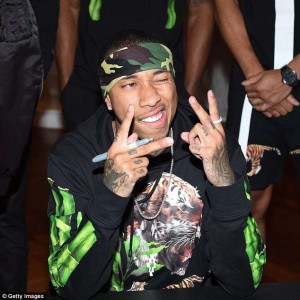 The highly publicized romance between Kylie Jenner and Tyga has ended just as abruptly as it started.

Flogged with multiple infidelity issues in the past, the former lovebirds are apart.

However, it seems like Tyga doesn’t have a problem when it comes to replacing the women in his life.

While Kylie finds comfort on the shoulder of her suppose-to-be brother in-law Scott Disick, her ex, Tyga spent his weekend in the arms and good company of two models Xanetia Unnarae and Jazmin Fernandez just weeks after his breakup from her.

Tyga was in the past accused of cheating with a brazilian model and  transgender model who even posted the rapper’s penis on social media as proof! Yes, he managed to find his way back into his girlfriend arms.

Sources told Hollywood life that Kylie and Tyga might have really separated for the best this time.

“She is definitely going to remain broken up with him, but she does miss him, they did have good times together and she is taking it all as best as she can. Among a handful of things she misses is all the drama the relationship brought. She was attracted to the dysfunction.”