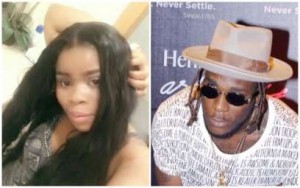 After being accused of impregnating a young lady, Burna Boy’s mother, Bose Ogulu had criticized Stella’s decision to go public with the pregnancy allegation against her son.

The lady, Uju Stella has now fired back at the singer’s mom.

The young woman posted a picture of Burna Boy and his mother, Bose Ogulu, in an embrace, and captioned it:

“Well, it’s a bitter story judging from the fact that no one from Burna By’s crew or whatever has bothered to get to me to hear my own side of the story, how difficult is it for someone to [differentiate] between a song being [sung], and someone playing around a song. Prosperity will not find whosoever lies over [flimsy] issues. Man up dude”

In a separate comment made on the same post, she added, as a form of afterthought, that a better mother would have acted differently in the same circumstance.

“And if you think you are a mother, please act like one,” she wrote.