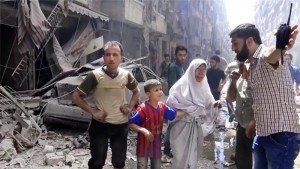 An agreement has been reached with Russia to extend a ceasefire in Syria to Aleppo province, including the besieged city of Aleppo, the US State Department said. The expansion went into effect on Wednesday just after midnight in Damascus (02:00 GMT), the State Department said, noting an “overall decrease in violence” since then despite some continued fighting. “Since this went into effect today at 00:01 in Damascus, we have seen an overall decrease in violence in these areas,” spokesman Mark Toner said.

The Syrian army confirmed the ceasefire, saying there would be a “regime of calm” in Aleppo for 48 hours, Russian ambassador to the UN Vitaly Churkin told the UN Security Council. Al Jazeera’s Rosiland Jordan, reporting from Washington DC, said that the announcement was delayed because “officials wanted to see how long it would take for the ceasefire to come into effect”. “They decided to announce it now because they believe that the ceasefire is holding,” Jordan said.

The US is coordinating with Russia to finalise monitoring efforts for the ceasefire and calls on all parties to abide by the agreement.  “We look to Russia as a co-chair of the International Syria Support Group to press for the Assad regime’s compliance with this effort, and the United States will do its part with the opposition,” the State Department statement said.

The United Nations Humanitarian Affairs chief Stephen O’Brien told the UN Security Council that the killing of civilians in Aleppo “cannot and will not be forgotten”, warning that perpetrators will be held accountable. O’Brien gave a rundown of deadly incidents in which residential areas, medical facilities and ambulances were targeted by government war planes and non-state shelling.  “Some of these acts amount to war crimes and crimes against humanity,” O’Brien said in New York.