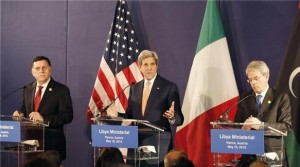 World powers are ready to consider demands from Libya’s new unity government for exemptions from a United Nations arms embargo and militarily equip it in its fight against the Islamic State of Iraq and the Levant (ISIL) and other groups. The joint decision, announced by US Secretary of State John Kerry on Monday followed a meeting in Vienna which was attended by diplomats from more than 20 countries.

The United States, four other permanent UN Security Council members and the more than 15 other nations participating in talks on Libya said that they were “ready to respond to the Libyan government’s requests for training and equipping” government forces. “The Government of National Accord has voiced its intention to submit appropriate arms embargo exemption requests to the UN Libya Sanctions Committee to procure necessary lethal arms and materiel to counter UN-designated terrorist groups and to combat [ISIL] throughout the country,” Kerry said.

“We will fully support these efforts while continuing to reinforce the UN arms embargo.”  Hafed Al Ghwell, a senior adviser at Oxford Analytica, told Al Jazeera that there are fears that weapons could fall into the wrong hands. “Now, if you give arms to the Tripoli-based government with its separate military, and if you try to encourage them to also participate, you have essentially taken sides in a civil war,” Al Ghwell said.

“And the trouble also comes with the fact that there are no clear guidelines as to how these new arms are going to be handed over to this Tripoli government,” he said. The conference was co-chaired by Kerry and his Italian counterpart Paolo Gentiloni. While the joint statement spoke of intentions, the fact that all five permanent Security Council members back the plan to arm the internationally backed government means that it is unlikely to face significant opposition from any quarter.