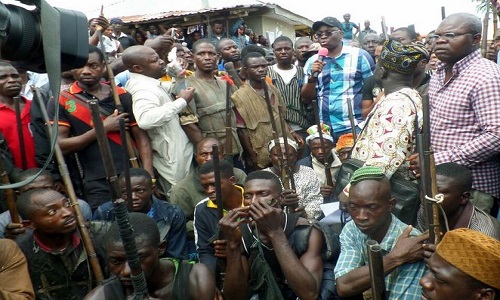 Governor Ayodele Fayose of Ekiti State on Monday declared total war on Fulani herdsmen in the state, vowing to defeat them.
Speaking when he met with local hunters in the Oke-Ako area of the state where suspected Fulani herdsmen allegedly killed two people and injured several others, the governor charged them to “terminate” the lives of the rampaging herdsmen.
Aggrieved by the recent invasion of the state by the herdsmen, Fayose followed up on his directive banning cattle grazing in the state by urging the hunters to be battle ready to confront any Fulani herdsman found flouting his directive.

Mr. Fayose said he would raise money for the hunters and provide them with vehicle and other logistics to prepare them for the coming war against the “political herdsmen”.
A video of the governor’s meeting with the hunters was posted on the internet while a transcript of his speech is provided below by Lere Olayinka, his Special Assistant on Communications and New Media.

The governor said, “Before leaving you today, I will raise for you(hunters) N2.5million, Secondly, I will raise N2.5m again for the affected families.
“I want to say it very clearly, everything you want me to do, I will do. Because the moment you are not secured then I had better resigned as a governor.
“If I cannot provide adequate security for you, it is better for me to leave this office. The only reason you voted for me is because you know I am competent to do the needful in circumstances like this.
“Nobody will take Ekiti away from us.
“This killing of our people must stop. It is deliberate and we must take all actions to stop it.
“They have killed two, they have killed all of us, a fight against one Ekiti man is a fight against everybody, the President must rise up to the challenge and stand this decaying security situation in the face, we cannot continue like this.
“When they defeat you they will go to the next community, when they defeat that community they will go to another one, this is Ekiti Parapo war and it must be fought in the totality of our spirit. I stand by you, I stand for you and that is why you elected me at a time like this. I will not disappoint you.
“Like I said earlier, you want a Pick Up Van, today, today, I will give you a Pick Up.
“Let it be said, those people behind this herdsmen, we’ll defeat you, we will defeat you. Enough of this political herdsmen operating as herdsmen but are Boko Haram, they are coming into South West gradually, we are going to fight you.
“Anywhere you find a cow that is grazing unnecessarily on our ways, call my attention, we will take them out. I am going to the House of Assembly to criminalize grazing in wrong areas. You hide under grazing to kill people, you are operating in the night, where would you tell me someone grazing found AK47?
“Some people are behind them, using AK 47, you rape my wife, you rape my children, if they attempt it, bring them down! Terminate their lives! If they claim they want to sleep with your wives, they want to touch your children, bring them down! Bring them down!
“It is a war against Ekiti, it must be fought with the totality of our strength. God bless you, I want to reassure you, we’ll provide the necessary security to keep you in your community. Don’t run away, don’t go to another community, it is your home and nobody will have to drive you out of your home!”