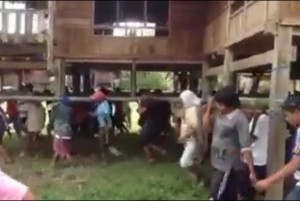 Duly noted, the term moving house means something completely different dependent on where you live. A video, uploaded by Rattanakamnerd Wongwarangkoon to Facebook, has surfaced online showing that when a group of people combines their efforts they can move mountains, well not mountains but very large houses.

The short clip shows a house which is on stilts being moved by an entire community of people. It looks as though there are over 50 people holding up the house by its wooden poles and moving it roughly 20-30 metres away.

On second thought what if they’re actually stealing someone’s house?