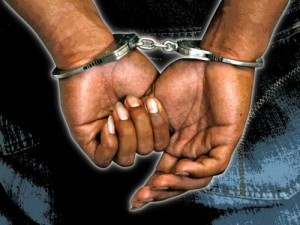 A suspected burglar simply identified as Dasuki shocked the police in Ogun State over the weekend when he led detectives to recover two truckloads of assorted goods he allegedly stole from various shops and houses in Mowe area on the Lagos Ibadan Expressway.

The suspect, a native of Badagry in Lagos State, was initially apprehended by a vigilance group employed by a Community Development Association at Gbegira, in Mowe, in Ogun State when he dropped the second of his two Ghana -Must -Go bags full of handsets and bales of clothes at about 3:00am. He was temporarily detained by the vigilance men to enable them arrest other suspects, but he bolted away, and was given a hot chase until he got stuck in a swamp.

He was rearrested and handed over to the police at the Redeemed Camp Division. Explaining his method of operation, a source said when he touches every building with a charm, all occupants goes to slumber, and become insensitive to anything happening in the house. He bores a whole on the wall, steals every valu- able thing, defecates on the floor and leaves a knife on the spot before disappearing into thin air. According to an official of the Development Association, detectives moved to the suspect’s house where his wife and mother in-law were sighted. But police watched in utter amazement several stolen items which were on the verge of being sold off to receivers of stolen goods.

“During the raid of his house, the police discovered over 56 assorted handsets, about 10 plasma television sets, desk and lap top computers, bales of clothing materials stolen from various shops and homes in the area,” the CDA official who pleaded anonymity said. One of the victims, a mother was said to have been burgled a day after she took delivery in her shops of bales of lace and Ankara materials. She allegedly wept uncontrollably upon discovery of the theft the following morning.

The items were moved to the station in two patrol vehicles while the police continued their investigations into the matter. During interrogation, the suspect confessed to stealing the items, usually at night and on Sunday when homeowners must have gone to church. “I normally bore holes on the wall to enable me enter into the houses and defecate there after each operation,” he said in pidgin. “I act alone, because I do not belong to a gang. When get the items, I keep them and sell them off,” he said. The suspect was believed to have perfected his crime with the assistance of a charm said to have been given to him by herbalist who made him invincible.