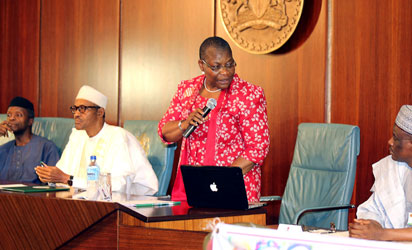 President Muhammadu Buhari has revealed that he gets so worried about the abduction of the Chibok schoolgirls so much that he dreads meeting with their parents.
The 216 schoolgirls from Chibok secondary schools were kidnapped from their hostel more than two years ago by Boko Haram gunmen.
In an interview with CNN’s Christine Amanpour in London on the sidelines of the Anti-Corruption Summit hosted by Prime Minister David Cameron, the president said he had met twice with the families of the abducted schoolgirls but said he tries to limit his meetings with them for his own “emotional balance”.
“I try to imagine my 14-year-old daughter missing for one to two years… a lot of parents would rather see them in their graves than the condition they are in now”, he said
“It’s tragic”, President Buhari added.
Asked about a video – exclusively obtained by CNN last month – in commemoration of the second anniversary of the Chibok girls abduction in which some of the schoolgirls were shown alive and appeared to be well-taken care of in captivity, Buhari said he had not seen the clip and insisted that he would not have shown it to the families even if he had seen it.
“How can we show it to them when we don’t know where they are?” he asked. “If we know where they are then we can organize to secure them. If they are divided into 5, 10 groups all over the region, there’s no way we can spontaneously and simultaneously attack all those locations. The important thing is to get them alive”, he said.
It was believed that the clip was made by an off-the-books negotiator between Boko Haram and the federal government.
Mr. Buhari, however, insisted that his administration is still trying to establish bonafide Boko Haram leadership before entering into talks with them.
“When we identify it, we are prepared to talk to them. We can’t just talk to whoever gets a video clip”, he said.