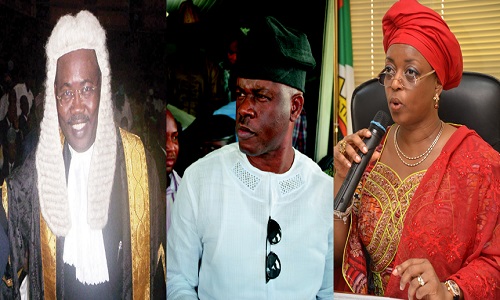 A pressure group within the Peoples Democratic Party known as the PDP Rebirth Project (PRP), has condemned reported plans by the federal government to seek the extradition of some leaders of the opposition party currently residing abroad.
The group also urged world leaders to be wary of supporting any extradition request from the President Muhammadu Buhari administration.
President Buhari, who is expected to join about 59 other world leaders in London later this month to sign an agreement to check looting of public funds by government officials, is reportedly going to use the opportunity to seek the extradition of some ex-government officials and PDP chieftains back home to come and face trial for alleged corruption, especially under the immediate past Goodluck Jonathan administration.
Such include the immediate past Comptroller-General of Customs, Abdullahi Dikko; ex-Minister of State for Defence, Musiliu Obanikoro; ex-Petroleum Minister, Mrs. Diezani Alison-Madueke; and former National Chairman of the PDP, Alhaji Adamu Mu’azu.
Others are Alison-Madueke’s son, Ugonna; a former Chairman of the Pension Reform Task Force, Abdulrasheed Maina; ex-Senior Political Adviser to ex-President and Coordinator of Goodluck Support Group, Prof. Rufai Alkali and immediate past Attorney-General of the Federation and Minister of Justice, Mr. Mohammed Adoke, who is being allegedly investigated over $1.1bn Malabu Oil deal.
But the PRP, in a statement in Abuja yesterday, said its decision to oppose the extradition move should not be seen as an obstruction of justice but a move to ensure that opposition figures do not become targets of persecution.
According to the group, it is ironic that the affected PDP leaders have summarily been tried and found guilty by Buhari and his party without being arraigned before any competent court of law.
“Now, they want to bring them home to be punished according to the dictates of the ruling party”, the statement signed by PRP Chairman and Secretary, Emma Wodu and Aderemi Coker, respectively said.
It noted further that “the PDP leaders Musiliu Obanikoro, Diezani Alison-Madueke, Adamu Mu’azu and Mohammed Adoke are not fugitives. If the government has any case against them, let such be taken before a court of law”.