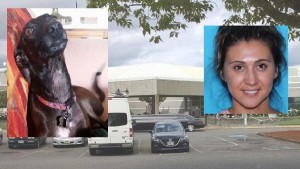 The Marion County Sheriff’s Office says a woman wanted for taking her tenant’s dog named Isis following a bizarre dispute showed up in a limousine at the Marion County Jail to turn herself in. Deputies say it all began when Brooke Skoda-Kempton decided to kick her tenant, Kate Taylor, out for “being disrespectful” late last month. Taylor moved out of the home the day she was asked to leave,deputies say, and sold her horses that were being boarded at Kempton’s mother’s house as part of the rental agreement.
Last Tuesday morning, deputies say Kempton went to Taylor’s father’s house on Marion Hill Road Southeast to confront the 61-year-old man, Kevin Taylor. Deputies say she told him that his daughter stole two saddles from her, and she was going to take Taylor’s dog, Isis, until she got her saddles back. “Ms. Skoda’s brought nothing to us in regards to those allegations.” Lt. Chris Baldridge, spokesman for the sheriff’s office, told KATU on Monday.
Kevin Taylor told KATU he jumped on the running boards of Kempton’s truck in an attempt to stop her, but instead of stopping, she accelerated and he was thrown from the truck. He said he injured his hand and wrist, was taken to the hospital but is now OK. Deputies say they were able to make contact with Kempton, who agreed to turn herself in at the Marion County Jail Friday. Kempton pulled up to the jail in a limousine and walked in about 10 minutes later.
The location of Isis the dog is still unknown, and deputies say Kempton refused to say where the dog is.
“She’s just declining to speak with us at all,” Baldridge said. After being arrested on charges of theft and robbery Kempton was released on her own recognizance. She’s due in court on May 27.