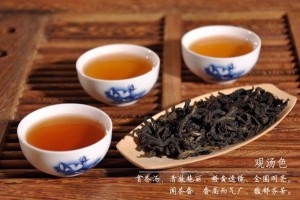 $10,000 for a pot of tea sounds excessive, but that’s the kind of price that wealthy tea-collectors are willing pay for a few sips of original Da Hong Pao, perhaps the world’s rarest tea. With a single gram priced at a whopping $1,400, this famously pricey tea is actually worth over 30 times its weight in gold!

So what make Da Hong Pao tea so valuable? According to Chinese tea master Xiangning Wu, it’s mainly its rarity. There are hardly any original Da Hong Pao trees left, and the antique varieties that grow in Wuyi mountains, China’s Fujian Province, are so rare that they’re considered almost priceless. In fact, generations-old tea makers have a special yearly ritual to  Da Hong Pao – they go into the mountains every spring to pray to tea god Lu Yu for new shoots. Some reports suggest that the leaves are wiped with goat’s milk as they grow, and after harvest, they’re baked and then left to gain flavor for up to 80 years.

Legend has it that these original Da Hong Pao also has incredible medicinal value – it is said that the when the mother of a Ming Dynasty emperor fell ill, she was cured by this particular tea. Following the incident, the emperor clothed the four bushes that provided the medicinal leaves with great red robes. And that’s how the tea got its name – ‘Da Hong Pao’ – which translates to ‘Big Red Robe’. Today, six Da Hong Pao bushes growing on a brick terrace in a vertiginous limestone face, in the Wuyi Mountains, are believed to be offshoots of those original bushes.

Travel writer Theodora Sutcliffe, who recently visited Wuyishan city in the mountains to find out more about the tea, confirms this, explaining that not all varieties of Da Hong Pao are expensive. “Though aged or antique versions can sell for extremely high prices, a Da Hong Pao of reasonable quality can cost around $100 per kilo in Wuyishan,” she writes in her BBC report. “But every genuine Da Hong Pao originates with a cutting from a single group of mother trees. And it’s these original trees that produce the rare and sought-after original tea.