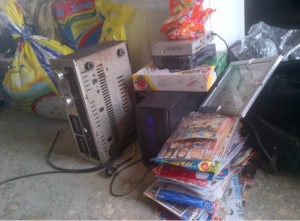 A 28-year-old student-pastor, Akintunde Olatunde, was today sentenced to three years imprisonment for burglary by an Osogbo Magistrates’ Court in Osun.

The magistrate, Mr Olusola Aluko, in his judgment, said the convict should be kept behind bars due to the magnitude of his offence.

The prosecutor, Insp. Fagboyinbo Abiodun, had earlier told the court that the convict committed the offence on June 10 at about 5:00 p.m., in Omobolanle area of Osogbo.

Abiodun said the convict conspired with others now at large to break into the apartments and shops in the neighborhood where they carted away some household and perishable
items.

The suspect also broke into the house of one Afolabi Temitayo and carted away his television, antenna said to value at N1,500 and a bedroom fridge.

He said the accused was a student-pastor at a prayer ministry in Osogbo.