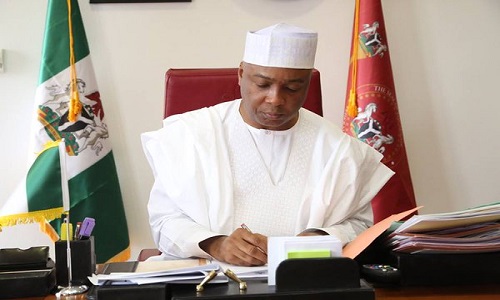 As the 8th Senate marks its first year in office today, INFORMATION NIGERIA brings you 10 things the senate wants you to know about their work in the last one year. This information is timely, considering the fact that for too long Nigerians have challenged them to justify their presence in the chamber.

1.We want to assure all across the length and breadth of our country that we are fully committed to continue representing your various and collective interests and aspirations.

2. The Legislative Agenda of the 8th Senate is anchored on three cardinal objectives of improving governance, improving business and, improving livelihood.

3.They have commissioned an expert report which identified 54 extant laws that must be reviewed and brought in line with international best practices in order to open our economy up for private investments and business. This according to them, is how they intend to wither the storm caused by the collapse in oil price, which has without doubt brought huge shock to our economy.

4. They said the electronic Transaction Bill 2015 when passed into law, will be the first legal framework ever in our country that provides the legal foundation for electronic signatures and guarantees predictability in contracts made electronically. This bill will offer full protections to contracts entered into via emails, and transactions conducted with online shops, electronic commerce and services platforms, which are currently not provided for in our laws.

5.The senate has also stated that the passage of the Railway bill will open up the subsector and attract the required private capital into this segment of our transport system that has appeared stuck in the past, the first  since 1924.

6.The senate also engaged in the Review of the Public Procurement Act, which was inspired by the need to guarantee government patronage for local manufacturers and their desire is to ensure that a substantial percentage of the N6 trillion in the national budget is retained in the local economy and put in the pockets of our people.

7.The recently passed into law agriculture credit scheme bill and the Chartered Institute for Soil Science bill, according to them are part of a critical segment of legislative interventions we have designed to boost the current policy on agriculture as a major plank of the diversification policy of government.

8.And to Nigerians displaced by Boko Haram insurgents, the senate is on the verge of passing the North East Development Commission Bill which according to them, is, a critical instrument to bringing succor to the displaced restoring and rebuilding the north east from the devastation that it has experienced in recent times.

9.The senate present noted that they are well aware of mass poverty endured by many Nigerians, rising cost of living, increased cases of retrenchment and corresponding rise in unemployment, the inability of state governors to pay salaries and the upsurge in ethnic-based agitation, and assures that they will do all they can over the next years ahead.

10. On the going security challenges being witnessed in the Niger Delta area, Senate urges the warring militants to embrace our democratic institutions and channel their grievances through appropriate quarters as Nigeria can ill afford further damage to the ecosystem of this all important region and any more disruptions in the system. In the same vein, They also encourage government to adopt dialogue and engagement as a more lasting option towards resolving this challenge.

Mr Saraki also  thanked Mr. President that Boko Haram, a mindless terrorist group that once threatened our corporate existence as a country has been severely degraded. He also commended the president for his bold and courageous fight against corruption, which has manifested in improved probity and accountability in operations of government business.