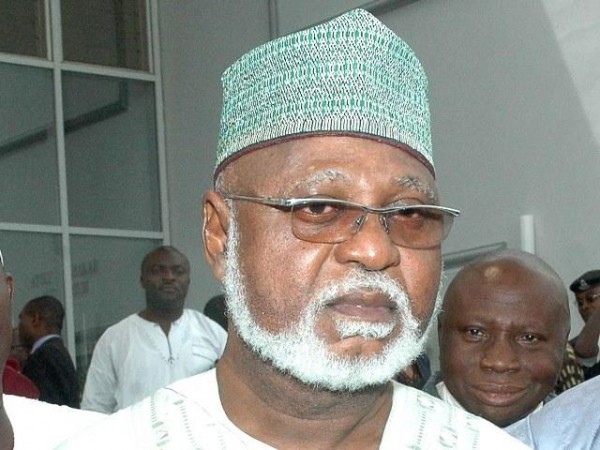 Former Head of State, General Abubakar Abdulsalam (retd.) has condemned the recent bombing of oil pipelines and installations in the Niger Delta by militant groups, calling on the perpetrators to channel their grievances through dialogue.
The former military ruler opined that the attacks by the militants have done more harm than good because the people in the Niger Delta region are suffering more from the devastating effects of oil pipeline bombings.
Abdulsalam made the call Tuesday when the leadership of the Niger State House of Assembly, led by the Speaker, Hon. Ahmed Marafa, paid him a courtesy visit at his Uphill Residence in Minna, the State capital, to felicitate‎ with him on the occasion of his 74th birthday.
“All we need to do is to sit down on a round table and discuss these problems. Even if you fight a war and win, you must sit down with the people you conquered. The insecurity we are going through now is uncalled for”, he said.
“For the Boko Haram, nobody knows what they want. The Avengers are now out, what are they avenging?” the ex-Head of State asked, adding “they are destroying our country and if they do not realize it, it is their land that would be affected most”.
Listing the disadvantages of resorting to violence in a bid to draw attention to the plight of the people of the Niger Delta, Mr. Abdulsalami said the lands will not be fertile for farming due to oil spillage, fishing activities will be halted as the rivers and ponds will be polluted “and even the 13 percent derivation from the FG would be affected” due to sharp decline in oil revenue.
“I hope they will come back to their senses and let us try to give this country peace. We do not deserve what we are going through”, the former Nigerian leader stressed.
“We need peace and I am begging everybody in the spirit of Ramadan. Whatever religion anybody is following, please let us give peace a chance”, he pleaded.
Turning to the visitors, who came to felicitate with him, the retired general tasked them on passing laws and resolutions that would impact positively on the citizens.
Earlier, Marafa expressed gratitude to God for using Abdulsalami to restore democracy to Nigeria.
The State Assembly Speaker described the former Head of State as an illustrious son of Niger State, whose counsel had guided the assembly in legislating for good governance in the interest of the people.
He said they came to wish the elder statesman well as he attained 74 years of age on Monday.