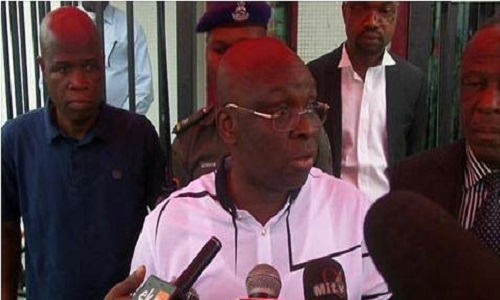 Fayose had alleged that Mrs Buhari was indicted in the Halliburton Scandal. “When that American, Jefferson, was being sentenced, the President’s wife was mentioned as having wired $170,000 to Jefferson. Her name was on page 25 of the sentencing of Jefferson. We can serialize the judgment for people to see and read,” Fayose had said in a statement by his Chief Press Secretary Mr Idowu Adelusi.

The governor was reacting to the freezing of his account by anti-graft agency, the Economic and Financial Crimes Commission (EFCC) which he described as unconstitutional as he enjoys immunity as a sitting governor.

Angered by Fayose’s claim which presidential spokesman Garba Shehu had dismissed as false, Mrs Buhari took to twitter to express her displeasure.

“Enough is Enough Fayose. A mad dog that isn’t chained. I refuse to keep quiet,” she wrote.

Enough is Enough Fayose. A mad dog that isn't chained. I refuse to keep quiet.