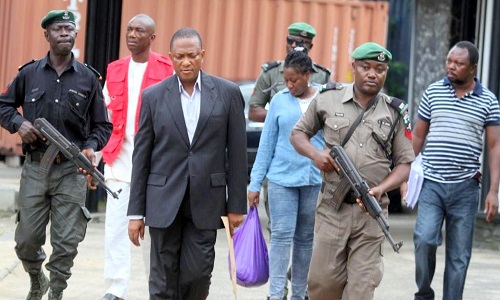 A former Commander of the Military Joint Task Force in the Niger Delta codenamed Operation Pulo Shield and current Chief of Logistics, Defence Headquarters, Maj.-Gen. Emmanuel Atewe, has been arraigned by the Economic and Financial Crimes Commission, EFCC, on an 11-count charge bordering on conspiracy, abuse of office and money laundering to the tune of N8.5billion.
The former JTF Commander was arraigned before Justice Saliu Saidu of the Federal High Court sitting in Lagos alongside the immediate past Director-General of the Nigerian Maritime Administration and Safety Agency, NIMASA, Patrick Akpobolokemi.
Also arraigned along with the former NIMASA boss and Atewe were Kime Engozu and Josephine Otuga.
‎This is the sixth time the EFCC would file different charges against Akpobolokemi for alleged fraud perpetrated during his time as head of NIMASA.
According to the prosecution, NIMASA, under the disgraced former DG, approved billions of naira to several military personnel, who were purportedly engaged to patrol the creeks to prevent pipeline vandalism and illegal bunkering.
The funds, it said, ended in private accounts through fraudulent means.
The EFCC said the defendants conspired among themselves to defraud NIMASA of N8.5billion using six companies – Jagan Limited, Jagan Trading Company Limited, Jagan Global Services Limited, Al-Nald Limited, Paper Warehouse Limited, Eastpoint Integrated Services Limited and De-Newlink Integrated Services Limited.
The accused persons pleaded not guilty to the charge.
Prosecution counsel, Rotimi Oyedepo, told the court that he was ready for trial with his witnesses and pleaded for accelerated hearing.
Counsel to the first accused, Mathew Bukar, however, prayed the court to grant his client (Mr. Akpobolokemi) bail, as he had earlier been granted bail by judges in the other cases where he is currently standing trial.
Counsel to the third and fourth accused, U.B.E Innaji also urged the court to exercise its discretion to grant bail in the favour of his clients.
However, the court rejected Mike Ozekhome, counsel to the second accused’s (General Atewe) prayer to grant his client bail on self-recognition.
After considering the bail applications, Justice Saidu granted bail to Akpobokelemi on the terms earlier given by courts where he is currently standing trial on corruption charges.
The second, third and fourth accused were also granted bail in the sum of N100 million each, two sureties, one of whom must be a senior civil servant of the rank of Deputy Director.
The other must be a relative who must have a property in Victoria Island, Ikoyi, or Lekki areas of Lagos.
The judge remanded the accused persons pending when they perfect the terms of their bail.
He, thereafter adjourned the case to June 24, 2016 for commencement of trial.