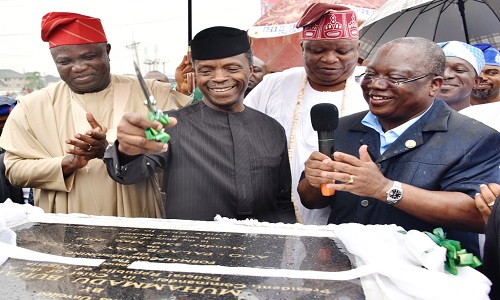 Governor Akinwunmi Ambode of Lagos State has changed the face of governance with his sterling performance in just one year in office, founder of Oodua People’s Congress (OPC), Dr. Frederick Fasehun has said.
The OPC founder, who described Ambode as a true leader and politician that identifies with the needs of people and delights in finding solutions to problems, was reacting to the commissioning of the Ago-Palace way, in Okota Isolo.
The road was one of the projects slated for commissioning by President Muhammadu Buhari during his botched visit to the state last week Monday. It was however, commissioned by Vice President Yemi Osinbajo, who represented the president.
Fasehun, who is also the National Chairman of the Unity Party of Nigeria, UPN, recalled that the road had been deplorable since the military administration of Brig. Gen. Buba Marwa (retd).
He recalled that Ambode, as the governorship candidate of the All Progressives Congress, APC, during the last general elections, promised to construct the road if elected and true to his word, he delivered on the project in less than a year in office.
He said, “Ambode has done extremely well judging by the nature of Nigerians when they first come to office. You wouldn’t know he is a Nigerian. He is out to serve the people; he identifies the need of the people and go out to solve such needs. If we have six of Ambode’s out of 36 state governors, Nigerians would be smiling. He has done very and I wish him well”.
“He should improve on the style of governance, you know me very well that I don’t fear to speak. I don’t think he has any shortcomings in any areas. He can look to do better because there is always room for improvement in all areas of human endeavour.
“Ambode in all modesty has introduced a new style in serving the people. He gave promise and he has kept the promise that is why people are praying for him, nobody jeers at Ambode. He moves with the people, he identifies with the need of the people and he is finding solutions to the problem”.
Fasehun further recalled that promises by successive governors since the era of Marwa to fix the Ago Palace Way-Okota Road did not yield any result until Ambode came into office.
“They could not do that until when Ambode came in last year and promised the people that he would rebuild Ago-Okota road and just in less than a year, you can see what Ago- Okota road is looking like.
“Should we not praise him for the good job done and urge him to continue? I know people who would hear me talking glowingly of him would say I have been given money. I have not met Ambode face to face like this. God admires those who tell the truth, Ambode has been serving the people very well”, the OPC boss said.