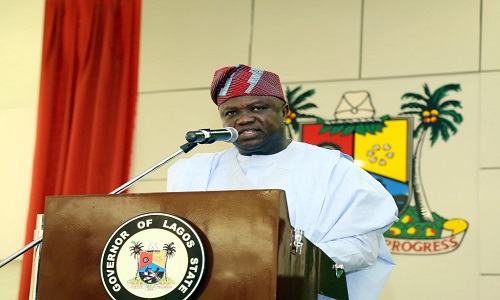 In a rare display of political maturity, the Peoples Democratic Party, PDP, in Lagos State has congratulated the State Governor, Akinwunmi Ambode, on his 53rd birthday.
Governor Ambode clocked 53 on Tuesday, June 14, 2016.
The opposition party said the Lagos state Governor is doing a good job, adding that he is making sure his campaign promises are fulfilled.

The PDP also commended Mr. Ambode for using the occasion of his birthday to solicit for funds towards the establishment of three mobile cancer centres in the three senatorial districts of Lagos.
The Lagos PDP spokesman, Gani Taofik said “The PDP opines that the governor has attempted to justify his election.

“Observing these attempts, such as in the area of road rehabilitation with pedestrian bridge construction, we will give the governor the benefit of the doubt that he is serious about serving the general interest and not parochial or APC interest as his predecessor did.

“We will keep a tab on his governance and commend or condemn same as applicable. In this period of his birthday celebration, we want to commend him and hope that he sees this assessment as a challenge for him to perform better”.

Taofik added that “The PDP wishes the governor good health, sound mind and, above all, the fear of God necessary for him to be responsive, productive and just to all. Happy birthday and many happy returns”.
The party, however, chided the governor for failing to conduct council elections into the 57 LCDAs in the state, following his appointment and swearing-in of sole administrators on Monday.

“More disturbing to us is that the governor’s lowest point at this time is his neglect to conduct election into the local government councils. This is long overdue. He should allow the Lagos State Independent Electoral Commission to announce the election date this week to serve as his birthday gift to Lagosians”, the PDP said.