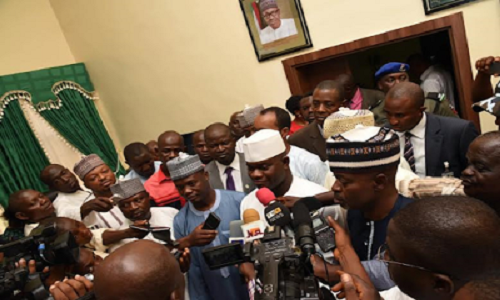 Governor Yahaya Bello of Kogi State yesterday debunked the allegation of anti-party activities leveled against his government by the state chapter of the All Progressives Congress, APC, saying it is a ploy by people who don’t mean well for the state.
The governor, in a statement issued in Lokoja, the state capital by his Special Adviser on Media and Strategy, Malam Abdulmalik Abdulkarim, described the allegation as “spurious”, insisting that APC members were well represented in the present government.
The statement noted that no member of the opposition Peoples Democratic Party (PDP) was part of his cabinet.
The Kogi APC had last week set up a committee headed by senator representing Kogi West, Dino Melaye, to investigate Gov. Bello over allegations that he gave preference to PDP members in his appointments.
“Most of the appointments made by the governor have the input of the APC chieftains in the state, including those crying foul. So, it is unfortunate to hear that party stalwarts were not carried along in the appointments and general administration of the state”, Abdulkarim said.