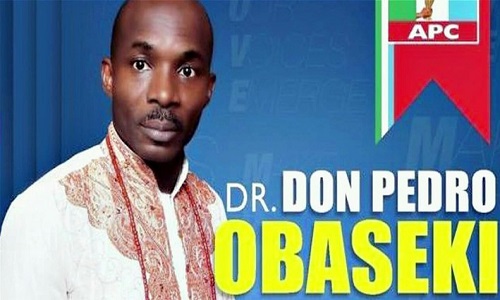 As preparations for the June 18 governorship primaries of the All Progressives Congress, APC, in Edo State reaches top gear, an aspirant of the party, Don Pedro Obaseki, has announced his withdrawal from the race.
Mr. Obaseki, who made the announcement on Monday, claimed that information at his disposal indicate that the governorship primaries would be anything but free and fair.
The governorship aspirant, who ruled out contesting on the platform of the Peoples Democratic Party, PDP, said he will make public his next destination after consulting with his supporters.

Addressing journalists in Benin City, the Edo State capital, Obaseki, who is also another APC governorship aspirant, Godwin Obaseki’s nephew, alleged that the sum of N600 million has been set aside to in his words “bribe” the about 3,000 delegates to the primaries to vote for a particular aspirant.
He said: “I am undoubtedly running for, and shall contest the 2016 Edo governorship election slated for September 10, 2016.

“I have lost faith in the APC primaries process. Unfortunately, I was in Abuja on Thursday and I stumbled on a document that I cannot divulge to the public for security reasons that makes it clear that all those who are buying or who had bought their forms to contest the primaries of the APC are wasting their time.

“As an academic and someone who is guided by thesis antithesis and syntheses, I elected to withdraw my intention to contest the primaries of APC, I will not tell you that I am no longer a member of the APC but I am more interested in being an E.D.O. (Empower, Develop and Opportunities) man than an APC man, I will rather be an EDO man than being a PDP. I am not running for the election as an APC candidate anymore, I am running for the election as EDO candidate on September 10.

“I have therefore, embarked on wide consultations with my immediate and extended family, supporters, friends and well-wishers and I won’t advise any of the aspirants to pay the whole sum of N5,500,000 for the expression of interest, and nomination forms of the APC. The coming primaries of APC will be the most expensive in our history because there are plans to bribe the about 3,000 delegates with N200,000 each”.