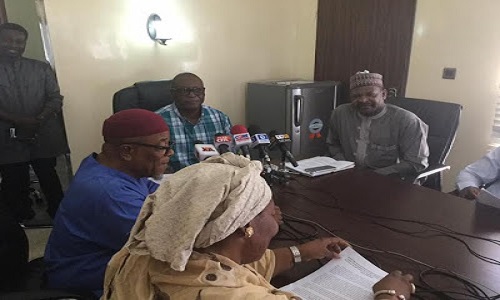 The national caretaker committee of Peoples Democratic Party (PDP) has alleged that Senator Ali Modu Sheriff is being sponsored by the governing All Progressives Congress (APC) to destroy the PDP ahead of the forthcoming Edo and Ondo States governorship polls and 2019 general elections.
The committee also ‎said for the embattled national chairman to have stormed the Wadata Plaza National Secretariat of the party Monday morning, accompanied by “heavily armed thugs” and men of the Department of State Service (DSS) in his convoy, was an indication that he “is acting a script of the mighty hands”.
Addressing newsmen on Tuesday in Abuja, spokesman of the Senator Ahmed Makarfi-led caretaker committee, ‎Prince Dayo Adeyeye, said ‎for Mr. Sheriff to also gain entry into the national secretariat to “takeover power” means that he gave false impression to the Inspector General of Police (IGP), Solomon Arase to allow his men, who initially barred him from gaining entry, to open the gate.
Sheriff had stormed the PDP national secretariat in Abuja yesterday and declared that he remained the authentic national chairman of the party till 2018, in defiance of the dissolution of his National Working Committee at the May 21 national convention of the party in Port Harcourt.
Mr. Adeyeye said: “What we are however very certain about is that Sheriff and his fellow renegades are being used by the enemies of the PDP to destroy the party and to prevent it from reorganising itself so as to provide a credible opposition and alternative platform for the forthcoming Edo State Gubernatorial election and 2019 elections.
“The All progressives Congress (APC) has contracted Sheriff and his cohorts to scuttle the chances of the PDP in the Edo governorship elections. We have credible intelligence that Sheriff had a meeting on Sunday night with an APC governor from North-west, where it was agreed that he would be given full security and financial support to exacerbate the crisis in the PDP with the objective of preventing the PDP from presenting a candidate for the Edo governorship elections, or in the very least to prevent the PDP from offering a serious challenge to the APC whose electoral fortunes has continued to nose- dive”, he said.