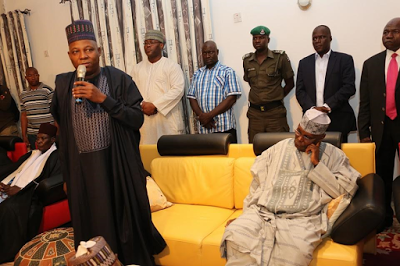 Former Vice President Atiku Abubakar has praised Governor Kashim Shettima of Borno State for recording tremendous achievements in office in spite of the challenges posed by Boko Haram insurgency.
The former vice president, who gave the commendation in a chat with journalists in Maiduguri, the state capital, said it was commendable that governance did not grind to a halt as a result of the insurgency in the North-East state, stressing it was evidence of the leadership qualities of Mr. Shettima.
“He (Shettima) is doing a lot of work to provide for infrastructure in the state. You can see new roads, buildings all over the state capital. But for the insurgency, he would have been perhaps the best governor we ever had around”, said Mr. Abubakar.
The Turakin Adamawa also used the opportunity to declare support for the new foreign exchange policy of the federal government, saying the move was a sign of a good omen for the Nigerian economy.
Meanwhile, Alhaji Abubakar, who just returned from a short foreign trip weekend, indicated that he would be spending the next few days in his home state of Adamawa and Borno, both ravaged by the Boko Haram insurgency.