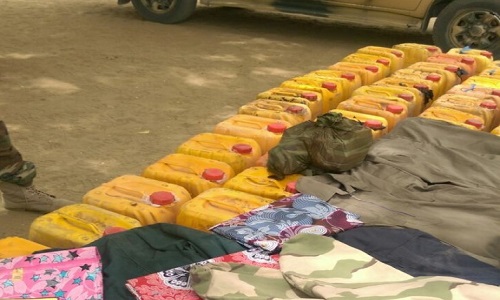 With the Nigerian security agencies tightening their noose around Boko Haram by putting them on the run and cutting off their source of supplies, the insurgents have now resorted to obtaining petrol by force from motorists in some parts of Yobe State.

According to some motorists who have fallen victim of the terrorists’ latest antics, their modus operandi involve laying ambush for those plying these routes in their vehicles and emptying their tanks.

It was also learnt that the terrorists usually offer to pay their victims for forcefully obtaining their fuel but the money is respectfully turned down because making fuel available to the militants under any guise is a slap on a prevailing warning by the security agents, which the motorists avoid at all costs.

A motorist, who recounted his ordeal in the hands of such Boko Haram terrorists recently, said he was offered money after 10 litres of petrol was drawn from his car tank.

“They offered to pay N2,500 per gallon but I refused to collect the money. One of them threw the money at me and they fled”, said the motorist, who simply gave his name as Goni.

Confirming the development, a top security officer told Daily Trust in confidence that they were aware of the situation and measure had been taken to reduce fuel circulation in the area to further deprive the insurgents of fuel.

“We made it a rule that no vehicle shall be sold more than 25 litres of petrol in Gaidam. We made a swift operation recently where we discovered the insurgents’ hideout in Kadari bush, killed 15 and recovered arms and 12 motorcycles”, he said.