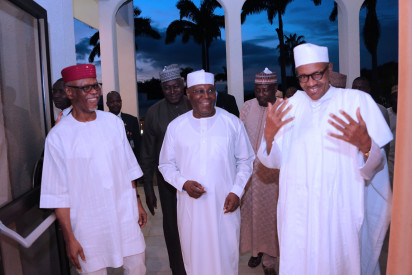 President Muhammadu Buhari on Friday hosted leaders and chieftain of the All Progressives Congress (APC) to observe the breaking of the Ramadan fast for the day.

The president has been hosting different groups and individuals to dinners since the Ramadan fast started earlier in the month. On Monday, he hosted security chiefs and gave the former Inspector-General of Police, Solomon Arase a farewell dinner.

Members of the Federal Executive Council led by Vice-President Yemi Osinbajo were also hosted on Tuesday.

However, a scheduled dinner with members of the National Assembly was hastily canceled on Wednesday

The Senior Special Assistant to the President on Media and Publicity, Garba Shehu said the dinner was postponed due to a clash of schedules as the lawmakers had other commitments slated for the same day.

“The President’s Iftar for the leadership of the National Assembly was postponed, to be rescheduled for another date.”

“This arose from the clash of schedules. You know the President spent the first 14 days of the fast out of the country. The schedule was put up hurriedly on his return to ensure that all interests are accommodated,” Shehu said.

“It turned out that the date fixed for the parliament could not be sustained due to prior commitments some of the invitees had. We are expecting that a new date will be appointed.”