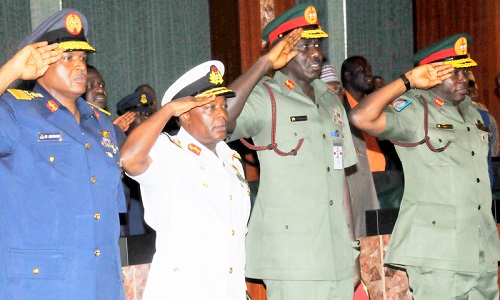 President Muhammadu Buhari, Thursday, held a closed door meeting with his security chiefs with a view to tackling the militancy in the Niger Delta region.

According to Channels Television, some of the issues reviewed at the meeting include the militancy in the Niger Delta region and the level of operations in the war against terrorism in the north eastern part of Nigeria.

Also in attendance were the Minister of Defence, Brig-Gen. Mansur Dan Ali (Rtd.), National Security Adviser, Maj.-Gen. Babagana Munguno (Rtd.), Secretary to the Government of the Federation, Mr. Babachir Lawal and the Chief of Staff to the President, Mr. Abba Kyari.

Vice President Yemi Osinbajo was also present at the meeting that lasted over three hours.