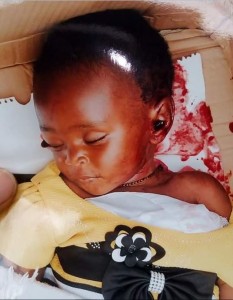 Pandemonium broke in Makurdi, Benue State capital recently when a commercial bus crushed to death an infant baby over N150 change, injuring the nursing mother in the process.

The father of the deceased baby who simply gave his name as Senator Anuum narrated that the mother of child had boarded the vehicle, alongside her baby, from the second gate of the Benue State University (BSU) to Coca-Cola junction located along the highway.

Anuum explained that when the mother of the child was about to alight from the vehicle at the junction, she gave the bus conductor N200 and she was supposed to be given a balance of N150 which, the conductor refused.

“The mother and her child, who she carried at her back, were the remaining passengers in the bus. The conductor did not want to give her the change and they drove off, in the process she grabbed the conductor that was already on the moving vehicle, with her baby at the back and she lost balance, fell down and was dragged on the road till the baby fell off from her back, in between the back wheels and was smashed, died instantly and the driver and the conductor drove off,” Anuum said.

It was further gathered that the barbaric act drew the attention of residents and passers-by who thronged to the place to catch a glimpse and rescue the wailing woman. It said the matter has been reported to security agencies.

Efforts to contact the police public relations officer, ASP Moses Yamu failed but a police source said the matter was being investigated to fish out the perpetrators.