Two children were rescued this morning from being killed by some members of Divine Zion of God Church Ikot Abasi Effiom district of Akpabuyo LGA and their family members after they were branded witches.

According to CrossRiverWatch, led by one prophet David Effiom Zion and some members of their family, the children, aged, 7 and 10, were accused by their cousin of being witches and allegedly snatching her baby in a dream. They tied the children to a tree and assaulted them with machete. 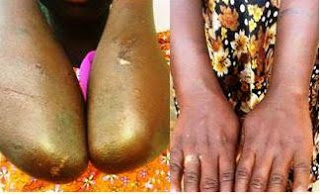 Below is the report by CRW:

“The stigma that confronted the children since they were branded witches took on a new dimension when the children were taken to the forest, tied to a tree, battered and assaulted with a machete by some members of the family, leaving them with cuts and bruises all over their bodies.
“This happened on the heels of the screening of the movie ‘The Fake Prophet’ in Ikot Offiong Ambai community in Akpabuyo Local Government Area (LGA) by Basic Rights Counsel Initiative (BRCI), a child’s rights organization based in Calabar
“Respite came the way of the children when an uncle who arrived from town demanded the release of the children with threats of calling the police and on learning of BRCI’s visit, took the children to the venue where the movie highlighting issues of child abuse and witchcraft branding was being screened.
“In his opening remark, the Secretary of BRCI, Barrister James Ibor noted that the movie screening was to mark the 2016 Day of the African Child, recounting the story of how the day was set aside by the Organization of African Unity (OAU) now African Union (AU) in 1991.
“Speaking also, Theresa Okpa who is the Executive Director of Mediatrix Development Foundation (MDF), the NGO of the Wife of the Governor of Cross River State, Dr. Linda Ayade said issues of child witch branding is abuse of the rights of children and assured that the Mediatrix Foundation is partnering with organizations like BRCI to address issues relating to the abuse of children’s rights.
“In the same vein, Rev. Okon James, the Assistant Pastor of the Mount Zion
Lighthouse Full Gospel Church Ikot Offiong Ambai, emphatically noted that their church does not promote the belief in witches and usually condemned any actions that abuse or torture children on the grounds of being a witch.
“Meanwhile, the rescued children were later taken to the Community Health Center where BRCI paid the bills for them to be given proper medical attention, while ensuring that the uncle who rescued them temporarily keep the children in his custody.”
Source: LIB