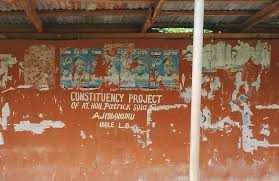 The Federal Government has said constituency projects, which the members of the national and state assemblies scramble to put in the budget every fiscal year, is an avenue for embezzlement and diversion of funds.

SEE ALSO: APGA Lawmakers Calls For Removal Of Constituency Fund From The Budget

Speaking at a one-day summit organised by the House of Representatives and Conference of Speakers in collaboration with the National Institute for Legislative Studies (NILS), which centered on political representation, constituency and zonal intervention services, Secretary to Government of the Federation, Babachir Lawal, noted that in the past, constituency projects had been the conduit pipe through which lawmakers embezzled money, but that the President Muhammadu Buhari’s administration had come to change the practice.

Also speaking at the summit, Minister of Works, Power and Housing, Mr. Babatunde Fashola urged the National Assembly to look at its duties as enshrined in the exclusive legislative list and pay attention to only projects that would benefit a greater number of the people and not do projects on primary healthcare services that were supposed to be done by the local government.

“I say this because we must avoid the risk of crowded projects where legislators at the national level are made strictly to implement constituency projects that involve primary healthcare centres, which are for the local governments,” Fashola said.