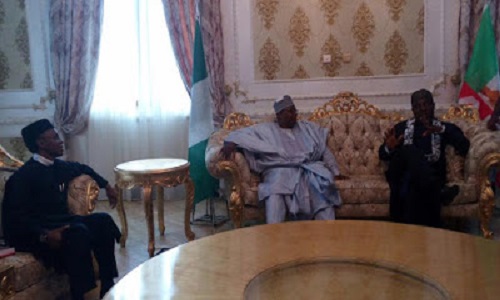 Governors Nasir El-Rufai and Mohammed Abdullahi of Kaduna and Bauchi States respectively, have called for the open trial of culprits in the murder of an Igbo trader at the Kofar Wambai market in Kano, Bridget Agbahime.

Mrs. Agbahime, 74, was killed by an irate mob at the market last week over false allegations that she blasphemed against Prophet Mohammed.
The police confirmed that two suspects were arrested in connection with the heinous crime and would be charged to court soon.
Speaking at a meeting with the leadership of Ohanaeze Ndigbo led by the President-General, Gary Igariwey in Owerri, the Imo State capital on Tuesday, the governors insisted that those behind the crime must be brought to book to serve as deterrent to others.

SEE ALSO: Police Say Trader in Kano Was Not Beheaded
National Chairman of the All Progressives Congress (APC) Chief John Odigie-Oyegun, was also at the meeting.
El-Rufai said the Northern state governors condemned the murder, adding that “we will not accept a situation where people, Christians or Muslims, hide under religion to commit crime. If someone insults God, he/she should be left for God to judge. I have advised the Kano State Governor to publicly deal with those involved to deter others”.
“I thank Ohanaeze for choosing the path of peace and unity. People are now using religion as a tool to divide and even defraud people. That necessitated the introduction of a religion bill in Kaduna so that people can be stopped from using divisive languages in the name of religion”.

SEE ALSO: President Buhari Condemns killing of Trader In Kano
The Kaduna governor explained that the menace of herdsmen had become a national crisis, adding that they (herdsmen) equally attacked Fulani communities.
“It is a problem that is affecting the whole nation. It is not a case of Fulani invading other tribes but a criminal activity that must be nipped in the bud.
“In pure Fulani communities, the herdsmen are equally attacking them in numbers, doing all kinds of ugly things like kidnapping, armed robbery, rape and so on”, Governor El-Rufai stated.
He commended Okorocha for his vision, achievements and Nigerianess.
In the same vein, Abubakar said: “The killing of Mrs. Agbaheme was an evil act. I have liaised with the Kano State Governor and he assured that arrests have been made and culprits will face the full weight of the law”.
Chief Oyegun noted that the country has to face its challenges squarely, just as he lauded the leadership of the pan-Igbo organization for their maturity in handling sensitive issues.
In his response, Igariwey said Ohanaeze was satisfied with Kano state’s handling of the matter, even as he cautioned against inciting statements from leaders.
He also lauded the goodwill demonstrated by governors El-Rufai and Abdullahi.
The host Governor, Owelle Rochas Okorocha, said the murder of Mrs. Agbahime had nothing to do with tribe or religion, stressing that “what is criminal is criminal, and must be treated as specified by law”.
“With what the governors said, it could now be understood that the Kano incident was not an attack against Ndigbo, but a case of crime. Seventy per cent of Nigeria’s problems could be adjudged to have arisen from lack of communication. It is also pertinent for us to know that the wonderful bridge that connects the Igbo to the North is not faulty. The bridge is as strong as it has ever been. The Igbos must fortify this bridge for both economic and political reasons”, Okorocha stressed.